Stephanie Young
Nara Ashiya (, Ashiya Nara) is the wife of Sakae Ashiya and the mother of Chisa Ashiya and Hanae Ashiya.

Nara has short bluish-black hair and blue eyes, which Hanae takes after.

Nara is a kind, caring, loving and energetic mother who constantly worries for Hanae Ashiya. She is also a florist, which she shows by expressing her feelings and thoughts through the various meaning of flowers.

When Nara was in high school, she began falling ill constantly due to being possessed by Yōkai. During her second year, she met Sakae in the infirmary where she was resting after feeling ill. Sakae had exorcise the Yōkai possessing her though Nara thought that seeing Sakae made her feel better and called him sunflower. After a brief introduction, Sakae tells Nara to return to her classroom or she'll feel "tired" again. Nara later learned from her classmate about the rumours circulating Sakae. She stated that the second time they met, Sakae's hair and eyes had turn black.[1] 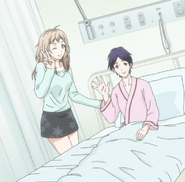 Add a photo to this gallery

Retrieved from "https://fukigen-na-mononokean.fandom.com/wiki/Nara_Ashiya?oldid=5615"
Community content is available under CC-BY-SA unless otherwise noted.