Secret Employee of the Mononokean

Sakae Ashiya (, Ashiya Sakae) is the father of Hanae Ashiya and a former secret employee of the Mononokean. He had been missing for years and is currently presumed to be either dead or a spirit of some sort.

Sakae has golden hair and eyes, similar to Haruitsuki. His hair reaches the nape of his neck and was either loose or half-up. During his appearances, either through flashbacks or Yahiko's transformation, he sometimes appears with black hair that are golden at the roots.

He is either seen in a black gakuran school uniform as a student, or in a long black hooded coat with fur trims as an adult.

From his appearances thus far, Sakae is shown to mutter frequently, and have a somnolent, indifferent character.

He was noted for having acted oddly, such as secretly nodding or talking to himself which Hanae takes as Sakae conversing with Yōkai.

It is speculated that he harbours resentment towards Yōkai for causing misfortune around him and the reason for exorcising them. However, he'd also helped Yōkai such as Tōgen.

He also seems to care and worry for Hanae, possessing him in order to save him, saying, "at this rate, you'll be killed too."[1]

Sakae attended the same school as Nara and was a year below her. He sensed a lot of Yōkai from the infirmary and found Nara attracting and being possessed by them. After he exorcised the Yōkai possessing her, Nara woke up and was awed by Sakae's appearance. They had a brief introduction before Sakae told Nara to return to her classroom or she'll feel "tired" again.

He was rumoured to bring misfortune to those that got close to him, such as his family who died, and his relatives and friends who constantly fell ill or got into accidents. For that, he was called the "God of Death" and was avoided by people.[2]

At a point of time, Sakae heard Tōgen's cries for help in the form of whispers after she was buried in the snow from an avalanche. He dug her out from the snow and tells her not to disappear.[3]

According to Haruitsuki's research into Aoi's records and the recounts of the Mononokean, there was an incident 16 years ago. Aoi-sama came back injured after disappearing for many hours for a job. When the Mononokean scroll questioned what had happened, Aoi responded "I watched a cat die", then they wept. Haruitsuki guesses the cat refers to Sakae, as he was secretly employed with Aoi since he was human, and so in Aoi's records they inserted Sakae as a metaphor, being a cat. It is the revealed that for some unknown reason, three years later, Aoi-sama disguised herself as Sakae and went to visit the Ashiya family on Christmas eve and left a doodled heart in their records for that day.[4]

Nara Ashiya mentions Sakae after Hanae pulls a yōkai that is possessing her and caused her to fall ill. Nara states she would always instantly feel better once Sakae comes around and does the same thing Hanae just did. Nara then claims Hanae takes up after his father in a weird way.

One snowy Christmas Eve, a young Hanae meets a man wearing a cloak and asks him if he is Santa. The man says no then picks Hanae up and embraces him. The man states Santa asked him to come see Hanae. In response, Hanae asks if the man is his father. The man says yes and tells him it is nice meeting him. The man was later revealed to be Aoi in disguise.

Hanae questions his sister whether their father ever told her he can see yōkai or whether she witnessed him acting strange. Hanae is cut off by his sister, whose usual cheery attitude is replaced by anger, and states that she doesn't want to talk about a man who abandoned his family. After a few moments, Hanae's sister apologizes for her earlier behavior and answers Hanae's question that their father has never mentioned seeing yōkai or anything strange but notes that it was strange that their mother would always get better if he goes near her when she isn't feeling well. She further adds that on those days, Sakae would act oddly, look around a lot and secretly talk or nod to himself. Hanae takes this as a proof his father was able to see yōkai, too.

When Hanae was controlled by Sasa and thought that he has killed Haruitsuki, Sakae appears in Hanae's subconscious. He tells Hanae that at the rate Hanae is going with his powers, he will be killed, too. He possesses Hanae's body. Sasa orders Hanae to kill Haruitsuki. Sakae, now inside Hanae's body, responds and orders the yōkai to shut up and states he doesn't need to shout as he can hear him. Sakae mutters about how a mere yōkai orders him around and tells the yōkai to kill Haruitsuki himself if he wants it that badly. Sakae breaks the seal of the shrine Sasa is kept in. Sakae asks the yōkai if he's not coming out after opening his prison. The yōkai notes the change in Hanae's eyes, which has turned into the color of Sakae's eyes, gold, due to possession. Outraged, the yōkai asks why does an ordinary human has eyes of that color. Sakae responds that unfortunately, he is no ordinary human and that he can exorcise yōkai. Sakae then uses his Influence and orders Sasa to "disappear".

As Sasa starts screaming that he doesn't want to disappear, Sasa remembers his first meeting with Sakae was, where Sasa begs Sakae to spare his life, but Sakae, deeming him untrustworthy, seals Sasa inside the shrine.

After Sasa disappears, Sakae starts to fall asleep, losing his hold on Hanae, but Haruitsuki orders him to stay up and says that he has two things to ask. Sakae tells him to hurry since he is already at his limits, so Haruitsuki asks if the one who sealed Sasa was him. He replied vaguely that he doesn't remember, but says if that's what Abeno says, then it must be so as not many humans can do it. He then starts to lose his consciousness, but asks what the other thing was. Haruitsuki just thanks him for saving Hanae as Sakae falls asleep. 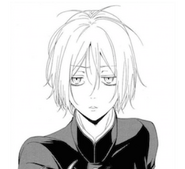 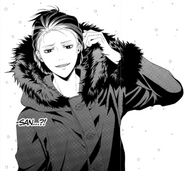 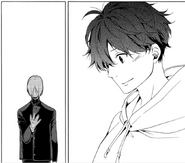 Tsuzuki Volume 4 Cover
Add a photo to this gallery

Retrieved from "https://fukigen-na-mononokean.fandom.com/wiki/Sakae_Ashiya?oldid=5614"
Community content is available under CC-BY-SA unless otherwise noted.