Tōgen is a yōkai who runs a hot springs for yōkai. She shares her body with Kowaku.

Several years prior to the start of the series, Tōgen was in danger of vanishing after an avalanche buried her and her hot springs deep under the snow. Tōgen nearly gave up after attempting several times to call for help but her voice is too soft for anyone. However, Sakae Ashiya appeared and save her from disappearing. Since then, Tōgen has never forgotten Sakae's help and mistakes his son for him when he visits her hot springs. 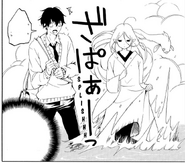 Tōgen appears from the waters

Hanae hears Togen's whisper
Add a photo to this gallery

Retrieved from "https://fukigen-na-mononokean.fandom.com/wiki/T%C5%8Dgen?oldid=5283"
Community content is available under CC-BY-SA unless otherwise noted.